06/19/12
We are now being dragged in battles that are of marginal significance to the  aims to the Egyptian revolution. They only alter the distribution of power amongst parties that have a vested interest in maintaining the very same political structure and web of interests that Egyptians revolted against a year and a half ago.

One of he prominent rallying calls of the revolution was “the people want to bring the system down”. The major features of the system where:

Those feature gave rise to cronyism and wide spread corruption that made daily  life very bleak for the average Egyptian. Hence, the popular chant in the early days “Bread, Freedom, and Social Justice”. Now the Muslim Brotherhood (MB) is  engaged in a power struggle with the Supreme Council of the Armed Forces (SCAF). Both of them have shown very clearly, during the past year and a half, that they are eager to maintain the promulgate  those features.

The power struggle between MB and SCAF has little bearing on what I see as the a key implicit demand of Egyptian revolution:

To create an open and transparent econo-political system with maximum latitude for popular initiative and collective problem solving.

This can never come about while the above features remain intact. I do not see it worth the effort of the revolutionaries to engage in “symbolic wars” against SCAF or to come to the aide MB as long as those features remain intact. There should be instead a concerted intellectual effort to chart and path that would  eliminate those rotten features and supplanting them by novel and efficient ones.

Chanting in Tahrir against the symptoms (or emergent properties) of the said features will not bring about positive change. The battle now is for outlining a clear plan for system wide transition and forming popular consensus about it.

02/8/12
A functioning democracy is much more than a ballot box and a “fair vote”. It is about a system of government, checks and balances, and above all certain principles that act as an anchor to those in power, and to which they are held accountable.

If we were to examine how the  United States Constitution was defended in the Federalist papers we get a sense of expansive minds with a deep awareness of history, human nature, and the passions and foibles that the pursuit of power often induces. The authors had  a very thorough understanding of the nature of their country and how their  union could prosper and be effectively preserved. A passage that I find particularly  relevant to the situation is Egypt:

...a dangerous ambition more often lurks behind the specious mask of zeal for the rights of the the people than under the forbidden appearance of zeal for the firmness and efficiency of government. History will teach us that the former has been found a much more certain road to the introduction of despotism than the latter, and that of those men who have overturned the liberties of republics, the greatest number have begun their career by paying an obsequious court to the people; commencing demagogues, and ending tyrants.

In the Egyptian parliament  there are now many Islamists  who have appointed themselves as spokesmen for the revolution. In their vacuous speeches the pay lip service to “rights of the people” and the “blessed revolution”.

However,  a few days ago they were dodging any attempts to discuss the brutality of the police in dealing with demonstrators  around the building of the ministry of interior (MOI). The demonstrations have been going on in the aftermath of the massacre of the ultras. They were denying evidence that the police were using bird-shot and live ammunition to inflict heavy physical and  psychological damage on the protesters. They payed no attention to reports  that surfaced a  day prior about that the head of the doctor’s syndicate who was injured with bird-shot while surveying the area around MOI, a news correspondent who suffered serious eye injury, or the  injury of the activist Salma Said (below left) . Instead, they were going through the motions of sending a “fact finding committee” and waiting for its report, all the while protesters where being shot at. The MOI building where all this was ongoing was only a few minutes walk away from parliament! 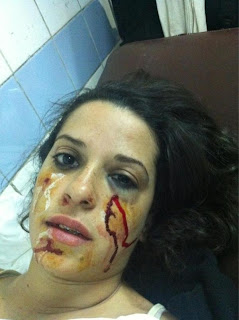 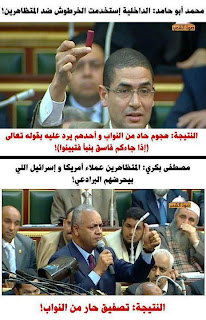 House speaker Mohamed Abu Hamid was was denied a chance to present evidence he had collected earlier in the day and was booed down by the Islamists majority. In the same session ex-regime puppet Mostafa El-Bakry was given ample time to glibly declare, without a shred of evidence, that the protesters are agents of the United States and Israel that they are being lead by El-Bradie. El-Bakry got a standing ovation from the Islamists!

The next day, while parliament was discussing the clashes that were still ongoing, a salafi house speaker decided to announce the call to payer in direct defiance of parliamentary procedure and  decorum. It is horrifying to think that men like these will be the ones charged with the task of writing our new constitution.

Egypt has much better men and women than those sitting now in parliament. Many in the ranks of revolutionaries are deep minded intellectuals, however they have failed at organizing themselves as a coherent block during the elections. They also failed at articulating the principles by which lived in Tahrir during the first eighteen days of the revolution. They were too busy trying to get the ruling junta to take obvious steps, like putting Mubark on trial, setting a fund for injured and families of the martyrs,or setting a firm date for the elections.

This  parliament is unlikely to survive for long. I have strong doubts it will be able to deliver to the Egyptian people the aspirations that they have sacrificed so much for. It may look like a democracy, but it is not a functioning  one, and it shows very little hope of functioning anytime soon. Given the glaring lack of intellectual abilities in parliament, it will require divine intervention for them to deliver an efficient national government. Such a government as the author the papers would put it, would be one where

…the best men in the country will not only consent to serve, but also will generally be appointed to manage it.

If the parliament continues to “function” as it has,  then we will follow a trajectory where we will have to suffer through the trials and tribulations that occurred during the passage from  the Dark Ages to the Enlightenment, albeit at an accelerated rate.

My hope still remains that Egyptians will find a way to carefully consider struggles of other  nations so that they “may profit by their experience without paying the price which it cost them”. Despite this rather disappointing first attempt at democracy, I am still hopeful. The revolution is still ongoing, and its spirit is like a phoenix and when things seem very bleak, I find those line echoing in my head

A thousand times I have been stabbed before
A thousand more times, till they I believe I am no more
Forever, I will rise again and on wings of truth will soar