The servile and hungry rise in thunderous applause to Works of their new god
The smell of decay stifling, but the fouls reckon it ambrosia
Cowardice begetting dystopia

A reckoning is overdue….

In agony, I cry for a dream forlorn

To build a world that is free of form

A world where Truth can again be born

Of purest thought, of noble intention

A world so free from any contention

As darkness falls in a starless night

I ride the winds to from whence I came

A place were Light will always remain

Where my dream can be reborn again

Wondering through an old town
I saw a sight that made me frown
People running all over the place
With no purpose, but an angry face

“We studied stars with microscopes
Viewed atoms with telescopes

“Then our hearts turned to dust
Nothing left that we can trust
“God is dead” the man proclaimed
“Man is god, man is great”

“When man is god all is abstruse
What use to him, is now the truth
Of a murky mix he did evolve
In murky chaos he must now dissolve”

Logic used to break man’s chains
From chains of logic it should break again
I weep for that post-modern man
Post-modern, postmortem and the world is bland

Lives wasted in transience
in false hopes of evidential existentiality

As a man drowning at sea,
exhausting all his energy swimming away from the visible shore
… for a straw to save him.

Damn him and his race!
He will get no quarter from his idol
… and no pity from me.

Cowards are the muck that we have to
tread through on our long march
… to freedom.

How many youths will have to die?
…to save your face and preserve a lie!

How much tears must be shed?
How much blood must be bled?

How many holy words used in vain?
To sow confusion can cause much pain?

Renaissance is nonsense!
Conscience is pretentiousness!

How many noble words by avarice consumed?
Can they one day be dug out and exhumed? 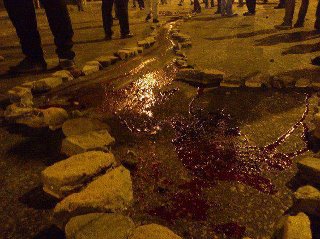 I hear an ancient echo from the deep.
“Arise right now! Do not sleep !
Till the earth and sow the ground
For what once was lost, has just been found!”

Whence such echo came?
Why does it now call my name?
Has it been heard before?
Will it be saying  more?

My heart now sings to a new tune.
My mind, for joy, is in a swoon.
But, what should I be doing now?
Unsure. I just repent and bow.

That ancient spirit will the show the way.
I am almost sure, I hope and pray.

05/3/11
No glory in slaying a monster you made
No joy! The debt of injustice shall be paid!
What justice and honor and values you state?
Feed anger with hate! Will hatred abate?
Celebrate, smile and self-congratulate!
Enjoy the night…
But when you wake: remember, it is not too late!

Update: This poem was significantly improved by the editorial input of Steve Smith of the Friam group.