Here is my attempt to solve the monkeys and coconuts problem. The story goes
that five sailors were stranded on an island and had decided to gather some
coconuts for their provisions. They put all the coconuts in one large pile and
went to sleep. One sailor got up and fearing that there could be problems when the
time to came to divide the pile, he divided the pile five ways and noticing that
he has an extra coconut, he gave it to a monkey, and then hid his stash. The other
four sailor repeated the same procedure. When they woke up they noticed that
they had a smaller pile and proceeded to divide into five equal piles, this time
around there were no extra coconut left for the monkey. So the question is: what was
the size of the original pile?

We will denote by

as the size of the
pile after the

th sailor has carried out his procedure. In this system

is original size of the pile. So following this procedure we then proceed as
follows:

It is important to note that

. Alternatively, we think of the reverse procedure and express the above as

This corresponds nicely to the answers that were obtained by rigorous derivation in the video, however it shows how programming can easily find such solutions by brute force.

If one would like to avoid the negative or blue concocts suggested in the video and also preserve the monkey. Below is an alternative derivation. Working through the first system, one gets: 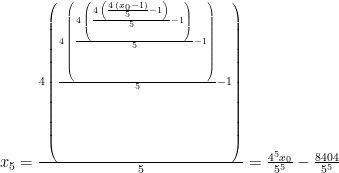 has to be necessarily divisible by 5, we denote the final share that each sailor gets in the last division by

. So our Diophantine equation becomes

.
It will have solutions at